This is not writing:

“I had a good weekend. I was driving through the countryside a lot, and on Sunday my son and I went to a local pub and watched the Masters while eating from their brunch buffet. Last night it rained, but overall it was a good weekend.”

No, that’s a brief brain dump; it’s a tweet storm. It’s not writing.

“Oh my God, last night about three I woke to something slamming in the backyard, and it was a can that was tossed by some gale from the porch to the patio. Just then the alert on my phone buzzed to tell me to “SEEK COVER NOW! TORNADO WARNING!” Before heading downstairs I looked through the skylight and didn’t see the normal trees which blocked the view to the sky so I ran…”

The first concerns more than forty-eight hours, with no details, no direction, and little more than a conversation with a stranger. In fact, the next line in almost any situation would probably be, “How about yours?” It’s not good when you can see the next line coming. The second, however, is about a few, brief seconds. That’s it. It has direction, a sense of urgency, because not only does the reader enter the story in the middle of some action–in medias res–the subject in the piece literally wakes in the middle of the action.

At my office at the university where I teach a couple of courses and a professor in the next office is telling her student to stop being so specific; good essays have a vagueness about them which forces the reader to fill in gaps. WHAT?!?! I’m not sure if I thought that or actually screamed that out loud. In any case, I picked up my stuff and headed out. I have been wondering for quite awhile if my lethargy and general malaise is from my heart meds and basic depression or from being around heartbreaking, basically depressing situations. I changed the meds and briefly felt better. Then that. Yeah, it’s the second reason.

I did a small test. I withdrew from all situations, all connections, all thoughts of obligations and expectations, I withdrew from routine and wifi and social media and, well, everything. Totally withdrawn. Get it? Promontory Man. And I tracked my health and the results were clear: I felt healthier, more rested, more alert, calmer, and more energetic without exception. I felt myself when I think of how I wish I would normally feel on the best of days. And this told me something most research institutes have been stating for years–our health is directly related to how we spend our time. When I left the college earlier, I was exhausted, though the truth is I didn’t do a single thing to cause such tiredness. It was psychological.

When writing I’m working on isn’t going well, I get tired. Some fluid in my brain changes its level and I am suddenly left with too little or too much of some sort of orphine, and I want to lay down. But when it goes well; when I sit back and see that I’ve managed to keep my own attention on a piece, I feel awake, ready to do whatever I’m itching to do. In both cases when I sat down I was equally tired or, more likely, evenly calm. I didn’t produce well because I sat down wired with all the wires cracking in my brain. It’s just that doing well at my craft somehow energized me. It’s as if if I write well I get to have a hit of something like concentrated caffeine. I come to life. It happens too when I’m walking and have a decent idea about something.

But if it doesn’t go well, I lay down and fall asleep while staring blankly through the skylight, or, like now, lean my head against the window here at Panera and hope no one hears me snore. This tricks me into thinking I need more caffeine, which of course I don’t, but if I get some coffee or tea or, you know, straight caffeine, I don’t produce better, I just get more restlessly tired and lay down but can’t sleep.

So I flip to social media or Netflix, or send out some filament from this promontory trying to connect to anything to make me feel productive, but of course it doesn’t work, so I put in a movie and figure I simply didn’t sleep well last night, tossed and turned, never got that deep sleep we need, today’s shot, I’ll try again tomorrow.

My point (and I did have one earlier in this missive), is when I am aware that if my environment is not working for me, I need to change my environment.

I am coming up on exactly one year later this week that I walked out of TCC after almost thirty years and never so much as glanced back. I know the arguments for that career–the income, the opportunities including world travel, grants, further education, connections, etc. Yeah, it was amazing and as close to not working as working gets.

You cannot create passion. You cannot bribe people into becoming passionate. The passion must always precede the efforts, and my passions always lay elsewhere. Leaving TCC wasn’t so much an exit as it was an escape. It isn’t their fault–nothing that place did caused my indifference and general malaise. I arrived that way. Truth be told, I never should have been there to begin with. At some point we understand the gap between passion and being practical. I was very practical–it was a great ride for three decades, but it came at the cost of that drive, that internal motivation, which, for each of us, rises eventually. And I found it again after I left, and here I am being anything but practical but feeling healthier than I ever have.

Okay, I’m being vague here. But good essays have a vagueness about them which forces readers to fill in the gaps.

Well, anyway, I’m heading to Ireland soon. And maybe I’ll just go back to Spain. Turns out from this promontory, I can go just about anywhere. My God, you should see the View from this Wilderness! 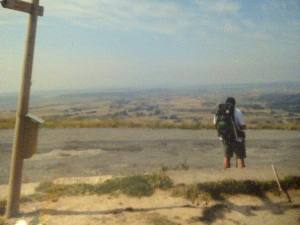