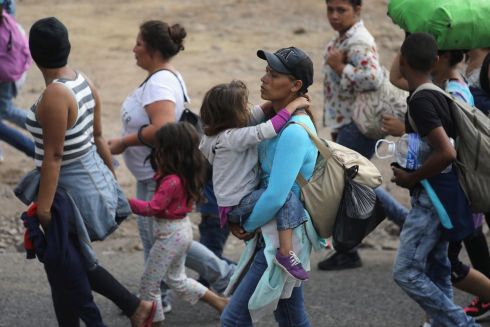 A new caravan of migrants is walking from Honduras to the US/Mexican border. Walking. Women and children and men are walking from the Honduran border to the US border, a distance of about 1600 miles. That’s like walking from New York City to Houston, Texas.

The vast majority of them, just about 99 percent, have no criminal background. Part of that is because the vast majority of them are children, but those left are laborers, agricultural workers, and more. Their jobs have been threatened by local Honduran cartels who force out or kill anyone not willing to work for them. These people are scared, and they’re determined to provide a better opportunity for their families, a better education, leaving home with only what they can carry or drag or are willing to abandon along the way to maybe–maybe–have a chance in the United States, because they already know they don’t have a chance in their native land. They’re walking across mountains, a desert, with hardly any food or water, risking the lives of their children to avoid the death sentence pretty much guaranteed in their homeland.

Their determination to literally cross barriers and risk separation, and even life, is a trait that carries them through the hardships of this journey. It isn’t unlike those fleeing Nazi Germany, fleeing Bosnia, fleeing starvation in Ireland, fleeing religious persecution in England, and on and on. The overwhelming majority of these starving, tired, battered souls are seeking something other than, better than, oppression and servitude.

Why aren’t we sending buses down there to get them and bring them here? What work force wouldn’t thrive on a population of people with such integrity and determination, who have clearly proven they would rather die than turn to a life of crime–if that weren’t true they’d stay home and move up the ranks of some cartel.

I have always been proud of most of my students, proud of their efforts to find their way in life. But they–we–could stand to learn from those whose sacrifices to better themselves can’t be compared to the so-called struggles we face on a day to day basis. Their pilgrimage to this sacred place–a journey three times longer than the Camino de Santiago from France to Spain–has taught them to carry humility, sacrifice, determination, compassion, and hope. Why wouldn’t we–my God I hope this is taken as rhetorical since it is so obvious–why would we not want them in our classrooms and workplaces as examples? There is nothing lazy about these people. If they wanted a lucrative life of crime they could have just stayed home.

This country has always benefited from immigration. In every study conducted by everyone from the NY Times to Gallop to CNN and even Fox, crime rates have dropped in cities where the most immigrants settled, the overwhelmingly largest percentage of drugs comes through recognized DHS check points, not across illegal crossing sections of the border, and the primary occupation sought by those fleeing crime and murder in their homeland is agriculture–jobs simply not sought by US citizens.

We should be setting up job fairs for these people, not jail cells. We should find housing and extended family and help them get settled as quickly as possible–there’s work to be done.

And I’d love to sit in the back of the classroom sometime while a student who might have crossed the 1600 miles from the Honduran border to the US border talked about what it was like, how the family survived, what dreams were they chasing, and what’s next. We could all learn from such fortitude, such determination, such hope. 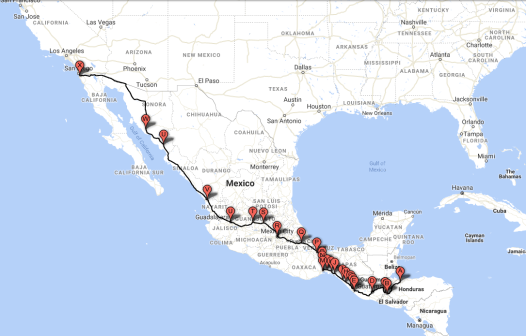