The fifteenth hole at Broad Bay Country Club in Virginia Beach is a par three. It isn’t long, just over 140 yards, but it can be a bit tricky. The brief, if any, fairway in front of the tee box slopes toward a creek and marsh, and the green is immediately on the other side of the bridge. Beyond the green are woods backing up to someone’s home, but to the left of the green is a broadening creek opening up to a bay. This hole gets in your head. I once stood waiting to hit while NFL star Bruce Smith whacked his tee shot with a short iron, and none of us had any clue as to where it might have gone. He took a drop.

I wasn’t there twenty-five years ago today when my dad took out a five wood to send it up high sailing over the creek to God knows where. It was only when they crossed the bridge and my father—most likely joking—and another gentleman, walked across the green and found Dad’s shot in the hole.

A golfer’s dream. He was so proud of that shot that day, and rightly so. It’s funny how one’s passion—and Dad’s passion for golf wore a thin disguise—can so occupy our conversations and memories. Dad recalled that shot on that day to his golfing buddies more than a few times, as if he was forever in some sort of disbelief it had happened at all. He knew it happened; but it simply couldn’t be true.

My father was a respected stock broker and vice president for one of the largest companies on Wall Street, he patiently and proudly raised three kids, and he loved—loved isn’t the right word, too soft, too simplistic—but he loved being around his family, his grandkids and his great-grandsons. Yet for his personal achievements, recalling that hole-in-one at Broad Bay made his entire being light up.

Most sports, or any hobby for that matter, don’t have many equivalents to this achievement. Winning a marathon, perhaps, or just completing one. A significant high-jump? Shot put? While “personal best” comes into play, those aren’t hobbies—anyone leaping over bars or tossing bowling balls across a field is most likely doing so at the competitive level. Maybe bowling a 300 game is the only other landmark for an enthusiastic amateur.

But the hole-in-one is one of the most famous achievements for the everyday player.

From the time he was in his late-forties when he first learned to play at Timber Point Golf Club on Long Island, he brought my brother and me out on the course and we all played together. For years, and in some way right up until just a few years before he died, we all would play golf together. It was a place we connected, talked, spent uninterrupted hours together, had lunch and kept playing together, encouraging each other on, and too often pointing out mistakes. I can still hear his baritone voice when a putt came up short, “Oh it is just short.” Mr. Obvious. Or more commonly when I’d mess up a swing, he’d quietly say, “You picked your head up.” No kidding.

And it is with some regret that neither my brother nor I were there on the fifteenth at Broad Bay that day. After half a lifetime of golf it would have been something to be there, to see his face when he saw the ball in the hole and said, “Oh boy!” That’s exactly what he would have said. As we both grew taller and stronger than our father, our shots were usually longer and our scores often better, but he was dangerously consistent, right down the middle of the fairway, and he could putt. In fact, the last shot he ever took in his life, on a practice green, was sinking a twenty-two foot putt. But of the three of us, he is still the only one with a hole-in-one, and it feels right this way.

The odd thing is when I brought the trophy home from my mother’s just about a year or so ago, I simply put it on a bookshelf and, honestly, I haven’t looked at it since. But for some reason this morning, I was getting a book and for the first time glanced up at the plaque and saw today’s date—March 25th. And then the year—exactly twenty-five years ago! I smiled and had a brief urge to call him.

But there’s no need. He called me, reminded me one more time about the sunny day in March a quarter of a century ago, and in my mind he told me the story once again. 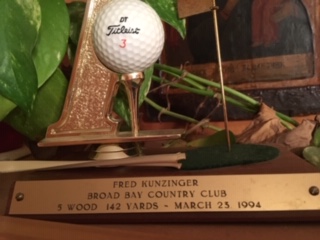