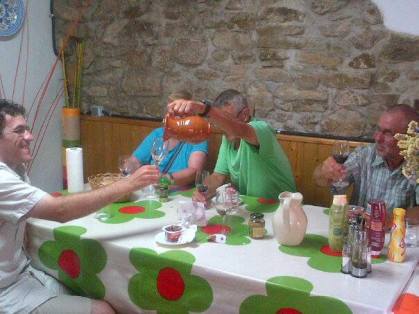 I spoke to a group of senior citizens about the Camino de Santiago. About eighty people ranging in age from mid-sixties to late eighties attended the slide show/lecture. I read excepts from my new book, talked about the nuts and bolts of walking the pilgrimage, and told stories which had us all talking and laughing. It was a great time, a really fine time.

Their questions surprised me. Not because they asked about experiences or meaning or significance or the people, though they did and I was sorry Michael wasn’t there to help answer some from his perspective; no, they asked about cost, time, sleeping conditions, safety, difficulty.

They wanted to know how to do it. A large portion of these mostly septuagenarians came to my lecture because they want to walk the Camino.

I told them about two men we met several times. They were from Germany and had already walked 2800 kilometers by the time we shared dinner at an albergue near Pamplona; both were about seventy-years-old. We spent the afternoon and evening drinking wine from clay pitchers and discussing the blisters on our feet. One of them introduced me to German sandals, noting he never had blisters. The other talked about their lack of concern for the distance covered each day.

I told my audience at the university about the lack of need to carry much; that the albergues have laundry facilities, comfortable beds, delicious food, and plenty of coffee. I mentioned if they wished to jump a difficult section of the Camino, they just had to hop on a bus for two hours and cut out about six or seven days of walking.

It turned into a riot, a gang of rambunctious, excited potential travelers no longer raising their hands or waiting for me to finish my response to other questions, but all calling out inquiries, talking to each other, laughing, making plans of when, and encouraging each other to join each other. They talked about Emilio Estevez’s movie, The Way, and how Martin Sheen was about their age, ignoring the fact he didn’t actually walk the Camino. I pointed that out and we laughed, but then one man asked, “But could he?”

It was rhetorical. Clearly this crowd knew about pilgrimage. They already decided he could and they could and they would and, perhaps most importantly, they should. They absolutely should. I saw more life, more excitement, more potential, and more determination in that room then I ever have in teaching twenty-year-olds the same information.

At some point we understand we don’t need to worry about as much as we thought; at some point we look back and see we tried to carry too much baggage. Usually, however, that realization doesn’t happen in our twenties.

But it happens. And for this group of retired men and women, some of them retired more than twenty years—longer than the life span of my average-aged student—they don’t see a finish line. They pulled out their phones and looked up the brand of sandals, costs of flights, regulations on carrying walking sticks on flights. One woman looked up books about learning Spanish. She is in her early eighties.

I love when we discover our mission here on earth isn’t complete as long as we are alive. Some people make excuses. Some make plans.

One woman asked me to point out if a trip like this is a realistic possibility. I pointed out they’d spend more in a week in Disneyland than a month on the Camino. I pointed out if they can walk four or five miles a day, they can at the very least do a portion of the Camino for a week or two, which is how must pilgrims plan anyway—few people have the time to do the whole journey in one shot. I pointed out they can skip the difficult parts, that it isn’t a competition or challenge.

I didn’t tell them about the memorial markers.

People have died along the way. Some travel there aware that their lives were at the end and they wanted their last steps to be on the sacred grounds along the Camino, dying in the footsteps of saints. Others didn’t anticipate the strain possible by not pacing themselves, or weren’t aware to begin with of a heart condition. Spain can be very uphill. I didn’t mention the possibility of dying along the Way because no one asked, and no one asked because by the time we reach that part of life we are quite aware of the rapidly approaching end of it all; no one needs to remind them they could die. In fact, it is because death is relatively imminent to begin with that they came to the meeting, asked the questions, and are making plans. They can’t control when the journey will end, but they all prefer to walk toward it, even if ever-so-slowly, than to sit still and wait for the end to come to them.

I walked to my car and wondered how I’ll handle being in a group like that when I’m their age, which is just a quick two decades from now. Less. Will I be thrusting my hand in the air, or, more likely, calling out questions without filters? Will I be taking notes, wondering how I can make some adventure with some new friends, saying, “yes” to invitations to try something new when so old? Then I thought how hopefully I’ll never go to one of those meetings. Hopefully, I’ll already be out there, further along this pilgrimage I’m on. Slower for certain, but moving forward.