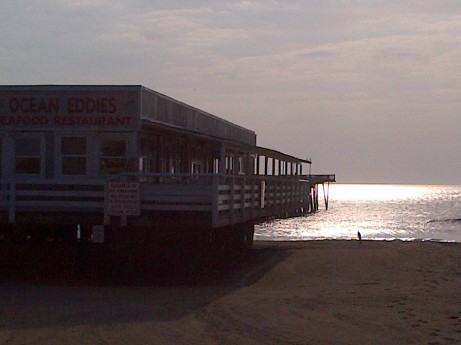 Yesterday I walked out on the 14th Street pier and stopped in Ocean Eddies. It was the dive I would frequent the summers during college. Back then the bar money was kept in a box and the register was a big brown monster. There was no a/c and the windows had to stay open in the oppressively humid night, but the live bands would wake up guests at the hotel I managed next door, so I had a deal with Eddie: I’d not call the cops on him and he quit the music by 1. Yesterday I paid for a drink and noted the same wood slat floors, but now there is a  deck. It felt good to have a drink above the sand, though thirty-five years ago the beach wasn’t as wide and more often than not the tide was just feet below the floor boards.

I was nineteen when I got the job at the Sandcastle Hotel at 14th Street on the beach. The owner, Johnny Vakos, and I got along, and the manager, Jack, had a heart attack about a month after I started, so John made me manager. I stayed that way for four summers, May until August, working all shifts, dealing with every character conceivable. Sometimes at night I’d head out to Ocean Eddie’s on the pier behind the hotel and swap stories with other locals over margaritas. Sometimes when I worked the overnight shift, come morning I’d head up to the seventies past all the hotels and sleep on the beach, and later in the day friends would show up and we’d waste away an afternoon swimming and listening to music. At night we’d all head to Sondra’s Restaurant or the Jewish Mother or Fantastic Fenwick’s Flying Food Factory to listen to our friend Jonmark Stone play guitar. But come the

following morning I was back at the beach, working the desk, talking to Niki the bike rental girl, bs-ing with guests about where to eat or the weather or surf conditions. I only have to think about those days and I can smell the salt air.

That part of my life stayed in my blood and every once in a while it passes through my heart and becomes real again. We all have periods of long ago like that. For me it’s probably this place because I’ve almost always lived near the ocean, or maybe it’s because our brains and bodies and this planet are all about seventy percent water and I simply feel the tug of the tide. Perhaps I just like the sound of the surf. But I’ve not come upon many places in my travels which simply don’t change. Old neighborhoods seem smaller, the trees suffocate the once open fields, and old hangouts usually have new crowds, or shut down, weeds pushing through parking lot pavement, some window broken and boarded near the rusted dumpster.

The rest of nature can show signs of change as well. Forests give way to fires, or new growth simply pushes out old oaks changing the landscape; rivers erode at the banks, and while the mountains can retain their majesty, trails and roads can rip small scars across the land, or some new cabin is built whose windows catch the sun and the glare flickers across the valley.

But I can stand on the sand behind the pier and know what i’m going to see. Certainly some days are rougher than others, and in winter a white foam can gather at the break point, but it is the same as it ever has been. The strength of a wave is like no other natural force on earth. Just to stand in the surf waist deep is a lesson in mobility and resistance no physics class could replicate. At some point you give in and fall back or dive forward, and feel that dark, salty, always slightly cool water sweep across every aspect of your body.

And when you look out across the vastness of nothing but blue water, steel blue, metallic greenish slate blue water, you are looking out at exactly what John Smith saw when he first landed a mile and half up the beach four hundred years ago. It is what Powhatan saw, and whatever wandering seaman or viking or ancient civilization saw, exactly the same. Maybe rougher, maybe in the morning perfectly still like glass. Maybe the tide was higher, or so low they could walk out to the scallop beds and pull them up by the load. But it is the same. Exactly.

I can stand here and it might as well be 1979, or ten years earlier and four hundred miles further north, on the beaches of Long Island. It simply makes sense. We all need a place to go that makes sense.

I read once that we all should discover a “third place.” We have home, which comes with it certain responsibilities and routines. We have work with its predictable patterns of give and take. But we need a third place that is neither, that is ours to claim how we want, and gather with friends, or be alone, and let our stresses and expectations dilute in the deluge of “somewhere else.” For many it is a bar, or a coffee shop, or a park or a gym. For me, back then, I thought it was Ocean Eddies where I learned more about people than I ever cared to know. But it wasn’t; it was outside, on the sand, looking out toward Portugal, toward Spain, and Africa. Looking up the coast toward the Island and wondering if anyone I used to know was looking south.

We all need a third place. We all have somewhere that gets in our blood.

One thought on “The Coast is Clear”