This Monday, May 23rd, is my dad’s birthday. He would have been ninety-one. A few years ago I wrote a trilogy about Dad which remains some of my favorite writing and memories. This is Part Two of the Trilogy originally published in Kestrel Journal, with part three later picked up for a Norton Anthology.

“Big Al” came in the Harris House Pub by eleven-thirty every morning for a few Buds and a pack of cigarettes. He couldn’t see well, and in fact worked at a nearby diner whose proceeds provided aid to the blind. He’d sit at the bar and talk about his daughter and how she doesn’t call anymore, and about his son who he hasn’t seen since he was young, who told him once, “I’m not spending my days dogging it for my blind dad.” Al was truly a big man and moved slowly. He’d gaze with difficulty across the thickest glasses I’ve ever seen, and walk the snowy streets with his hand touching the wall. He’d pause every once in a while and wait and then continue, eventually swinging open the old door to the Harris House to sit on the same stool closest to the door, order his Bud and begin the questioning.

“Who played in the first world series? Who won?”

I’d laugh and make a few drinks for other customers then wander into the back. When I returned with ice for the bin I’d say, “Pittsburgh versus Boston, 1903, and Boston won …um…five to three!”

“Excellent, Bob, here’s another quarter,” he’d say and laugh, saying to his friend Kenny at the next stool how I was a walking encyclopedia of baseball facts.

“Who struck out more batters in his career than anyone else?”

I’d return with hot food from the kitchen for a customer. “Too easy, Al, I grew up watching him when he was with the Mets! Nolan Ryan!”

Another quarter hit the bar.

My co-worker Sandy figured I had a baseball encyclopedia in the back but I told her I didn’t.

“When was the first professional baseball league formed?”

Kenny followed me to the kitchen after one of Al’s questions and heard me on the phone: “Hey, highest batting average. Cobb? What was it? 367—got it, talk to you soon.” I turned and he laughed. “Some hotline?” he asked. “Dad,” I told him.

“Cobb. 367,” I said, placing another beer on the counter without charging him. Al never lost a dime.

Back before cell phones, when payphones were standard, my father had an 800 number at his desk, and wherever I traveled in the United States I could call him for free—from the Arizona/Mexican border, from Maine, from every dusty state in between. I’d tell him where I was and how life was progressing, and he’d tell me what was new with him, my mom, and life in general in Virginia Beach. A certain peace permeated the air back then, a silent sense of security until the next payphone in the next state.

Dad’s hearing, of course, has grown weak, and he rarely talks on the phone. He watches the games with subtitles on, but they don’t always keep up with the announcers rapid-paced reporting. It’s harder to see the score box on the television and sometimes keeping track of what’s going on is frustrating. When that happens he tells me about his youth in Brooklyn, the Branch Rickey days of the Dodgers, and going to Ebbett’s Field with his friends or his father. He still knows the players’ names, the records, the managing staff and where they went after the Dodgers went to California. He asks me to read the time so he can watch the weather, unless the Mets are playing, and David Wright is on deck, and while the World Series may not be in the cards for the home team this year, Dad takes each game one at a time.

We’re into extra innings now, breaking records just by marking time. I loved going to games with him in New York, or watching New York games with him on television in Virginia, like I loved calling him up for facts.

Through it all, though, baseball had nothing to do with it. 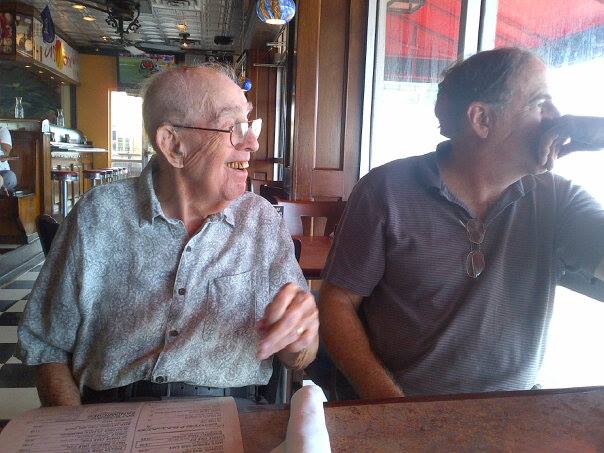 I miss you Dad.