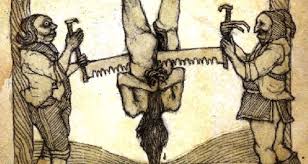 We’ve been at each other’s throats from the start. Maybe it was land, maybe shelter. Most definitely food. But someone’s blood pressure went through the cave roof and instead of compassion we bred confrontation; instead of agreement, anger; instead of compromise, deep-rooted rivalries that most definitely predate the old testament with Ruth and her indecisive demands about parenting.

I have spent several hours on several occasions at the Medieval Torture Museum in Prague and have seen what engineers devised to make the pain last as long as possible. One contraption which looks exactly like a birdcage would be stuffed with a very-much-alive and kicking naked person whose crime warranted such punishment, and the cage would hang from  Charles Bridge until birds pecked the flesh from the bones, and nothing was left but carcass. This is real, this is while Magellan was at sea and Sir Thomas More was pissing off Henry the Eighth. Some of humanity’s greatest inventions came from this age, some of its greatest art. This is the Renaissance, moving into the Baroque era, and Vivaldi and Pachelbel would soon be composing. Bach. Michelangelo had already finished the ceiling, and Da Vinci’s David chiseled its way into the top ten list of examples of human potential.

Right about then, a woman for the simplest reason might have been put into a suit of armor filled with small holes and stood in the square with or without a helmet, depending upon her position in town (certainly a woman of worth would be spared exposure since friends might be in attendance at the piercing), and swords would be pushed through one side and through the body and out a hole on the other side. This, over and over so that a dozen or more swords had been used from all angles.

The one which made my blood run cold and my knees weak, though, was a frame about ten by ten, from which someone would hang by the ankles spread eagle, the hands tied in opposite corners at the bottom, looking much like an inverted image of Da Vinci’s Vitruvian Man, which, ironically, he drew at just about this time, and two men would take a huge tree saw, one on each side…

(Caution: What I’m about to write will make your knees weak. Skip this section if you must)

…and saw back and forth from the crotch down through the center of the torso until they reached the neck and the body fell to both sides, a mirror image of itself dangling from the frame. The person was so hung on the structure so the blood would remain in the heart and head keeping him/her alive for most of the ordeal.

These are our predecessors. The things they were capable of. We now have the technology to create the illusion we have improved since the middle ages. Spoiler alert: No, we are worse. If you base success on improvement, much as a student who doesn’t write any better on paper four than on paper one is not going to receive the same grade as given on paper one, than humanity, despite its leaps and bounds and small steps and giant leaps, is still making freshman errors. We put children in cages, we slaughter each other in deserts and mountains of the middle east, we all stand on the bridge to watch the violence unfold, we despise what’s different, we ridicule what threatens us, all the while praising ourselves for creating faster download speeds.

Maybe it’s too much red meat. Too much caffeine. Not enough contemplative walks in nature.

We sapiens disagree over just about everything, and since humanity’s natural instinct is to survive and protect our own, fighting has been inevitable from the start in a world with more people than cultivated resources, more need than ability, more fear than communication.

It’s a shame how much potential we have squandered; how often through the millennia we might have refocused our attention on constructive endeavors. Across the Vltava River from the torture museum is the remnants of Charles the IV’s Hunger Wall, a stone fortress of a wall which at one time almost encircled the city in the 1400’s. It was built by men who were otherwise starving. Fearing insurrection and at the same time needing protection from outside invaders, he offered food for anyone who worked on the wall, plus enough for their families. A place rarely visited, nearly never walked. Everyone’s over in Old Town at the Torture museum.

On the top floor is the rack. Yes, an actual, blood-stained rack–not a replica. They’re pretty big, and, yes, they can rip limbs apart. It was in the same room as the chair filled with nails facing up and out from every aspect of the seat and back, and the guilty party sat on it while a press was cranked into his/her chest, and while weights were set on his/her legs. Who designed this? Who swung through the 15th century version of IKEA and fumbled with the parts, directionless, and then tried it out–just a little, “say when,” and signed off on a successful dry run?

We did that. Us humans. The same ones who came up with penicillin and the printing press, the Last Supper, Monet’s Gardens, flight. We figured out how to transplant a heart, how to radiate cancer cells, how to calm a crying baby. Also, how to build gas chambers to eliminate an entire race, how to create one piece of munition with enough power to evaporate a hundred thousand people instantly, and how to find the rationalization to drop the damn thing. Us.

The brain is capable of extremes, of love so timeless that it seems created before two were born and saved just for them; and hatred so virulent that genocide becomes an anticipated act; murder a preconceived plan; road rage commonplace and almost laughable.

The view of humanity from an historic standpoint is disheartening. I understand the accomplishments, the “we can send a man to the moon” yardstick, the soundbite which entices us to really believe there isn’t anything that is bad in society that can’t be fixed by everything that is good in society. Yes, of course. But we’re behind the eight ball here, and apparently the great flaw of creation is that doing right is harder, suppressing anger more difficult, advancing more troublesome, than doing wrong or evil or even worse, nothing at all.

I wish we could just start over again. Give back that metaphorical apple and wipe out the sin. While most people still believe the myth that we use only ten percent of the brain (the truth is all of the brain is usually active and at work), our actions perpetuate that myth since they show we simply are not thinking.

The view of humanity is depressing and embarrassing, and I’m certainly no help. I’m of the category of those who are more likely to do nothing than to help, but right now that has to be a leap ahead of the countless lost souls doing harm, torturing our posterity. I at least hope I have a leg up on them.

So here’s a small contribution with a bow to the better angels: I can point to the east, early, and say, “Look. Look at that,” as the sun breaks the surface of the morning, pushing back the dark blue, unraveling hope, as it always has, and we can watch it together, share a glance of what Rita Dove says is “The whole sky is yours to write on, blown open to a blank page.”