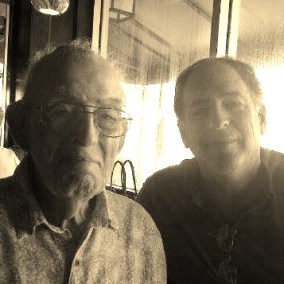 On Tuesday nights my dad and I drank Scotch. Dad always liked J & B, a blend to which he probably became accustomed early on. On occasions he drank Chivas, aged just right, and a few times he had a bottle of Edradour in the house. On Tuesday nights we poured two glasses on the rocks. Routine is important and I’d get there about nine and was no sooner in the door when he’d jokingly say, “My coaster seems to be empty,” or something similar with a laugh and a welcoming smile. I’d put my things down and offer to pour, and he’d insist he was just fooling and didn’t mind at all getting our drinks, which was true. He would walk in the kitchen and I could hear the cabinet and the ice and the heavy bottle he put back in the cabinet, never leaving it on the counter for more because we never had more. He’d return steadily and slowly and hand me my glass and we’d raise them to toast and he’d say, “Well,” nodding his head politely at a loss of words, and I’d interrupt and say, “to your health,” to which he would again nod and with his deep voice reply, “and to yours.”  Then we’d watch baseball, not really talking much. It was late. He sipped his Scotch.

But I hate Scotch, so I preferred to pour. When I went in the kitchen, everything was the same but instead of Scotch in my glass I had mostly water. Dad’s eyes had faded in those last few years and he wouldn’t have noticed the lighter tint of my drink. And anyway, it wasn’t about the Scotch. We sat together a long time those Tuesday nights and he would turn once and say, “Boy this is good, isn’t it?” and I’d agree. Sometimes I felt guilty and would pour a bit more for myself as well, but usually only when it was a single malt. After a while he would head upstairs to bed. Then I’d sit alone in peace after a long day, but inevitably I’d wish he had stayed up longer even just to sit quietly. I’d promise myself that the next Tuesday while drinking Scotch I’d make more conversation, talk more about the game or about my day or anything really, since he wouldn’t have minded even turning the game off, but the following Tuesday would come and like clockwork I’d be exhausted and silent and we’d watch baseball and he would get tired and go to bed. It was always fine.

My father aged well, and sitting with him on Tuesday nights was the purest time I had during those days. I can still hear him say, with a slight laugh, “My hand feels very light,” or “Sure I’ll have a small glass,” even while my coat was still on, and sometimes I can recall it with a laugh, but other times, when I get home late and stand in the driveway on a clear, cold night, it is too real to think about.

And as odd as it may seem, it isn’t simply my father in the paternal sense that I miss; that we all understand. No, it is the small things that rip at my seams, like seeing someone eating a bowl of blueberries or a cup of she-crab soup, the sound of ice in a glass, someone jingling coins in his pocket, baseball. The sound of golf on television, the aromas of Thanksgiving Day, the opening theme music for “Law and Order,” lunch specials at boardwalk restaurants, cardinals in spring.

When Dad first retired I’d bring his toddler grandson to the mall where Dad walked in the afternoon and we’d “run into” Grandpa. I never promised either my father or my son we would meet so as not to disappoint either if we didn’t. But when we did, nothing could distract Grandpa from walking around at the apex of three generations. Dad’s smile exploded with happiness when he watched his young grandson run toward the toy store, or when we stopped for ice cream and Dad would pretend to lick some of my son’s cone. The two of them would laugh hysterically until my son offered him an actual lick, which Dad always refused with a strong, “Thank you very much.”

Once it really was an accident, meeting Dad at the mall. On that occasion my son and I walked around and discovered Dad sitting on a bench, taking a break from his walk. His face lit up, of course, when his grandson ran up to him. It was as if an ordinary day of routine was suddenly cracked wide open by this small but exciting surprise. I believe the spontaneity of unexpected meetings must have made it seem more like my own youth, when siblings and cousins and countless friends lived close by and visiting was normal and running into each other at the store was an ordinary occurrence. Dad lived for family. So sometimes seeing his grandson at the mall was a beautiful mixture of possibility and recollection. 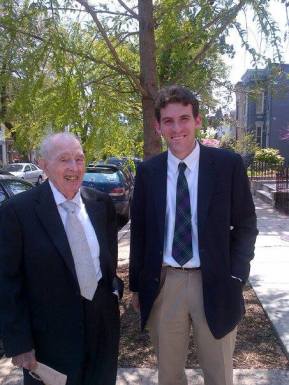 When that did happen I would often hang back as we walked so it felt to both of them like they were alone. They discovered the stores together and Dad always allowed his grandson to pull him into the ones he wanted, namely the toy store or the bookstore. Dad bought more than a few books on those visits, and somewhere in my attic is a box of those books from those days. I thought a lot about those walks when he died almost five years ago when after the funeral we all went to a restaurant, and my now adult son ordered Scotch on the rocks. Perfect.

Perhaps if I become a grandfather, my son will take those books with him—I am sure of it. And when I sit somewhere with my own grandson on my lap to read to him, I’ll picture some inconceivable moment in the past when my father and my son laughed hard together turning the pages, and I’ll think about the passing of time and the persistence of memory. It makes me keenly aware that my father might very well have sat with my son and remembered our time when he was a young father and he’d read “Big Little Books” to me, or how every Christmas he bought each of my siblings and me a book to suit our personality and hobbies.

Someday I might sit in a comfortable chair and a golf tournament will be on. I’ll offer to get us a couple of ciders from the refrigerator, or perhaps even a good, aged Scotch. I’ll offer to pour but my son will insist I stay seated and he’ll retrieve them himself, knowing, of course and without offense, in that particular instance, it is my own father I’ll be thinking of. 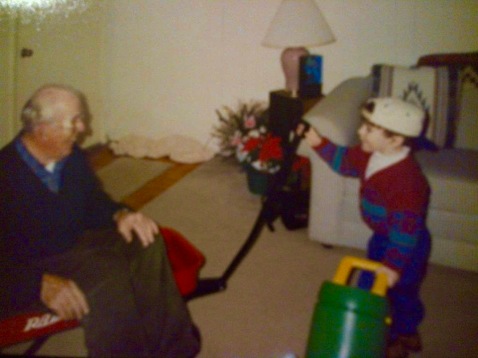 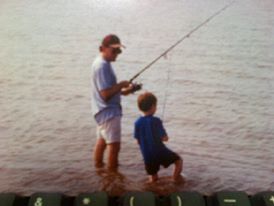