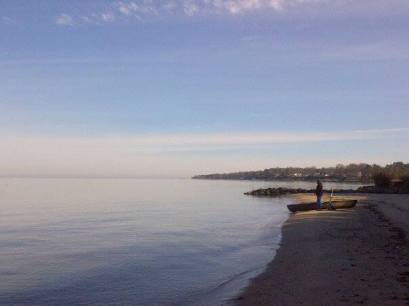 My entire life I’ve been running behind. I figured out quite late how to plan ahead financially, professionally, and even emotionally; long after everyone else I grew up with. I am the one who always thinks of just the right words to say only after the situation is over. And I’ve objected throughout my life to changes in plans only to completely agree later, after I’ve thought it through more.

I’m not good at so much of what is necessary to maintain a normal life. A significant slice of my brain still thinks I’m in my twenties, ready to start anew, chase some other dream. Another portion of my cerebral pie is still in its teens, excited about a hike through the woods, wondering if any of my friends on the old block are still interested in a long walk along the creeks of Heckscher State Park on the Island. And still another remains the hopeless romantic, surviving crisis after crisis throughout this narrative just knowing that when we get to the climax, it’ll all turn out just fine.

I’ve mastered the art of self-deception. I’m the proverbial creator of castles in the air, and I’ve convinced myself I’m not too old to build foundations under them. My justification for such quixotic approaches to things is how well it has worked for me thus far. I’ve had my share of living, of adventures, of trunks filled with experiences that have filled dozens of journals from Africa to Russia to Mexico to Norway. I’ve done the professor thing. I’ve built the house in the country near the water and raised a fine, fine son. The old Zen stuff I learned in my teens in the seventies panned out—visualize and follow through. I’ve been best friends with adventurers, artists, musicians, writers, soldiers, homeless, and drunkards.

And I’ve been lucky enough to have older siblings who are two of my heroes; two people who I not only look up too, but who have inspired me more than I can appropriately write about; my parents, too, were examples—in all, four people around me all the time, all raising me to some degree, and still, their lessons I learned far too late. I’m not complaining—just the opposite, my God, I’ve had the chance to live more lives than I ever imagined possible when I was young. What a pilgrimage it has been so far.

But (there’s always a “but”). I was at a meeting many years ago and the division chair had asked us all to tell ten of our own accomplishments—not school related—that no one there would possibly know about. My turn came and I mentioned some things I was proud of, and secretly as I read the list, I thought two things simultaneously. One part of me was thinking, Wow, I’ve had some really great opportunities. But the other part of me was thinking, I’ve spent more of my years not doing things than I ever spent doing things. I feel like I’m still trying to figure out what to do with my life.

There is good reason for thinking that second thought, about how I was “not” doing things, because I was, in fact, doing a lot: I had a young family, I finally had a career, a mortgage, and a job that afforded me chances to do so much of what I wanted. But there was always something missing, something I always felt like everyone else knew about for themselves a decade or two before me, but I just couldn’t put my finger on it, like it was always just out of reach. Everyone I knew seemed to feel settled, like they had found for themselves exactly, I mean exactly, where they should be and what they should be doing. I could see it in their enthusiastic attitudes, in their engaged eyes, in their unrestrained energy for their work, and I just figured I’d come to that attitude late, like I always have, but it never showed up. I thought maybe I’d find it in one of the two dozen trips through the years to Russia or Prague or Amsterdam, or if I wrote it through enough, I’d find it in one of my stories. Well, as another influence in my life, Jackson Browne, once wrote, “I can’t help feeling I’m just a day away from where I ought to be.”  Yes.

Then came this allusive Covid-19, a phrase which has suddenly entered our lexicon without any warning or slow introduction at all. Just “Bam! Covid-19!” And we have been told to isolate as much as possible. We’ve not yet been given the order here in Virginia to stay in place, but when we are, well to be honest, nothing’s going to change much around here. The property alone is huge with trails and a wrap around porch and a patio where I spend much of my time doing work. The river is right here, and it leads directly into the Chesapeake Bay. The village is sparse so that pubs are still open for people who, sitting far apart, can relax on the deck and have a drink. Like always. Nothing here has changed much. My daily walks are still my walks daily, and I still never see a soul while doing so.

So last night I sat at the desk about 3:30 in the morning and read some rough drafts of my work and had an urge to go online and plan some trip; maybe drive to see a friend in Ohio, or head to Florida or New England. I’ve had a burning desire to hike the paths on Antelope Island or have lamb at Peklo in Prague. Yes, I’d apply for some grant like I have so many times before, and I’d just go, and I’d write about it.

But we all now find ourselves in this precarious position of not being able to do what we could so easily do just days ago. We’ve been told to isolate. Down in the city it seems these days that just going to the store is dangerous, making us reevaluate how important that bag of chips really is after all. Now all around the world people are staying in place, like it was a massive game of “Red Light” and God suddenly screamed “STOP!”

It is one thing to blame our inaction on lack of finances or being too busy at work and it is another thing altogether to have immobility thrust upon us, to be told any plans we may have had must be cancelled or, at the very least, postponed.

I despise postponing anything, but in particular, life. There isn’t that much of it to begin with for the youngest of us; and there certainly isn’t that much left for the healthiest of us. So postponing and “waiting it out” contradicts everything believed in by those of us who want to empty the tank before we end this mortal ride.

Now’s a good time to think about this. I wasn’t doing anything anyway. So I stayed up late, or got up early, I forget, it was 3:30 am and I was tired, but I was up and I thought about it and I came to a fine realization, an absolutely perfect epiphany: It is the searching I am after; it is the “looking” I look for. Even Don Quixote isn’t trying to slay any windmills; it is the pursuit which draws him. I have learned after so many years and so many miles that it is the absorption of life on the road, the cultures, the laughter with others that is my livelihood. There isn’t anything in the journals I was ever actually after; it was having something to write about at all that mattered.

We are always faced with the ancient and abstract question, “What do you do for a living?” Well, for a paycheck I teach college. For a “living”??? Well, for a living I have celebrated Victory Day with World War Two vets in Russia on the 50th and 60th anniversary; I walked across a frozen lake in the Arctic while bands of aurora borealis bounced just over our heads; I stood on a rock next to an obo with my son on a hillside above Lake Baikal, and a year later we walked across Spain. I sat and drank vodka with a Russian photographer and friend after his wife died, and another friend of mine and I spent hours counting stripes on the wallpaper in our hotel room. We had wine, yes.

This all crossed my mind at 3:30 am after yet another day of not going anywhere along with everyone else on the planet who is not going anywhere for quite some time to come. Sitting still and isolating myself has set my mind free. Too free, perhaps, so I’ve got to occupy my mind before it gets out of hand and I discover, too late of course, that I’ve wasted even more time. To that end, my moments hence forth and until I’m directed differently will be spent working in the garden, fixing the shed, cleaning out the attic, canoeing to Parrot Island, writing letters every day to my dearest friends, and more, and more.

I am very excited about possible quarantine. Very cool. You see, if we are forced to focus on one or two things, we can usually master them. Put anyone alone in a room with just two things to do and wait three weeks. They will have mastered those things, of course. But life doesn’t allow us this; life demands a degree of multitasking we will never be able to master. But limit me to two things? Really?

As they say in this neck of the woods: Here, hold my beer.

This is what I’m best at: Individual moments. I just could never put my finger on it. But this is how I make a life; slipping all these beautiful individual moments together on a string. I’ll make pretzels and we’ll laugh and drink coconut rum and experiment with the dough. I’ll organize all my photos. I’ll clean up all my flash drives. I’ll wash the windows and they’ll be the cleanest frigging windows in the village.

I’ll learn to be excellent at just a few things within my grasp instead of half-ass at things just out of reach. Why do I feel like everyone else already knows all this?

Still, it won’t last long. I know me. I may have come to understand who I am later than most people, but I’m there, and there’s still too much gas in the tank to not pursue what’s just out of the reach of my headlights, so I’ll keep driving. Someday I’ll learn. Someday.

One thought on “I so late.”