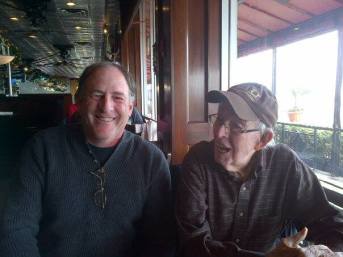 I remember Dad was a coach for my Little League team, and I was not a good hitter. I could play outfield just fine, but at the plate I panicked. He offered me ice cream every day for a week if I hit a home run, and I did. He knew just what I needed for incentive. To be fair, I hit a line drive over the second baseman’s head which then rolled between the legs of the right fielder; several throwing errors later I scored. I asked the manager if he could mark it as a home run instead of a double with extra bases, and he said yes. Dad just laughed and did, in fact, buy me ice cream every day for a week. We’ve all got stories like that. We all remember moments like that.

Then there was the time just he and I went to Jolly Rogers Amusement Park on the Island. Maybe I was eight. I don’t remember. But I wasn’t tall enough for some of the rides, and it was just the two of us. When you come from a family of five, time alone with anyone is rare. With Dad it was usually my brother and me with him, playing golf mostly. I like how most of us have several sets of memories—me with Dad; me with Dad and my brother; me with Dad, my brother and my sister. And of course all five of us. Those categories create different memories of various personalities. Dad was different when all three of his kids were in tow—more responsible, more reserved. Crazy how three kids can have completely different memories of the same event, the same person even, but put them all together and it’s a life, a home.

Dad taught me to drive, how to come out of a curve, how to anticipate what all the other drivers might do, how to expect the worst. I remember how when I was a senior in high school, he’d let me have his car. He and I, twice a week, would go to a local Dunkin Donuts and have coffee (juice for me) and donuts (double chocolate glazed for me) and then I’d drop him off at his carpool and I’d head off feeling way older than my seventeen years. And in the decade that followed I traveled all over the country, and because he had a toll-free number at his desk, I would call a couple of times a week to say hi and update him on my whereabouts. He was always interested, and I must say, now that I think of it, I don’t remember him ever—ever—not taking the time to talk. Like the time I called from Massachusetts to tell him I was going whale watching off the coast of Maine. He was so excited, I can still hear his baritone “Oh boy, that will be something!” But I lied. I was actually in an airport when I told him that, and I was flying back to Virginia along with just about every relative we had to surprise him for his sixtieth birthday. When he and my mom walked through the door to a thunderous “SURPRISE!”  he said, “I thought you were going whale watching!” I swear I’m pretty sure he was disappointed I was there and missing that boat trip. I assured him I’d be going when I returned north. We all remember that party, I’m sure. That’s how I recall it; that and the mostly naked woman who showed up to sing Happy Birthday, compliments of one of my uncles. Mostly I remember Dad asking about Maine. He did his fair share of traveling in his life, but he loved to hear about all of our adventures.

I happened to start teaching college just before he retired, but Mom was still hard at work, so Dad would show up at my office around lunch time once he knew my schedule (to his last days, despite a fading capability to remember most things, he always remembered my schedule), and about once every two weeks we’d go to some fish joint around the beach.

Then Michael was born and since we lived just a mile around the corner from my parents, I’d walk Michael to their home during the week while Mom was at work and Dad and I would kind of talk—mostly I watched television while Dad held Michael or played with him, or walked him to the water to show him the ducks. I have more pictures of my son and my father together than either of them with me.

My son reminds me in just about every way of my father—quiet, patient, deeply kind—and that spills over into their passions for history and golf. The best times were when my brother came to town and the four of us would play, but even just the three of us was always fun. And always my father and my son would talk about books and about golf and whatever else there was to talk about. And they’d joke around. 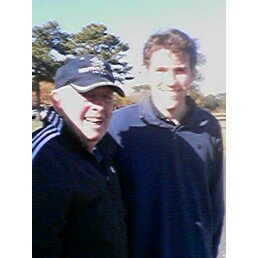 My father’s feet, however, were never really strong, so he couldn’t join Michael and me in Busch Gardens with our season passes. At first Michael wasn’t tall enough for some of the rides, but that just meant we spent more time playing games until he had so many stuffed animals that we had to bag them and donate them to a children’s hospital. He still has a big blue fish around here somewhere. Since we live just a few miles from a beautiful golf course, we played a lot as he grew, and he always brought his camera along.

And then when my son was in his teens, I taught him to drive, how to come out of a curve, how to anticipate what all the other drivers might do, how to expect the worst. I wonder if when Dad taught me to drive, he thought about the same thing I thought about when I taught Michael—that what I really just taught him was how to leave home. I remember telling him about being in college and while other students in my dorm would spend twenty dollars on beer at the skellar, I’d borrow someone’s car and spend twenty dollars on gas and head to Niagara Falls or Lake Chautauqua. He got it right away. I remember how he figured out the highlander got about twenty-five miles per gallon, and how a gallon cost about $2.50 at the time, so he knew ten bucks would get him a hundred miles. I said to him, “So you’re asking me for ten dollars?” He looked past me for a second, figuring, and said, “No. I’ll need a hundred and sixty.”

Funny how now he can travel anywhere in the states and call me for free, tell me about his adventures.

But there’s one significant break in this progression of DNA—the gap between my father’s generation and mine was significant. His was World War Two, the Andrew Sisters, dressing down was loosening the tie, he and Mom had their friends and did their thing, and I had mine and did my thing, and never the twain did meet. But there is very little gap between my generation and my son’s. For the most part we listen to the same music, watch the same movies, and being in your fifties now isn’t nearly as settled down as being in your fifties forty years ago.

So when I headed to Siberia, Michael came along. And Spain was our trip together from the start. And through it all he would read everything, wanting to know the history, amazed at the details.

These days, when Michael isn’t out at art galleries, he works in a library. And sometimes when I’m home I’ll drive down and see if he wants to get lunch at one of the fish places around, and he’ll tell me of his plans to ride his bike from Pittsburgh to DC, or to go do another artist residency on one of the Aran Islands in Ireland, and I tell him, with a tinge of envy, I’m as excited as he is, and I’ll probably be just as disappointed as he if he doesn’t go. 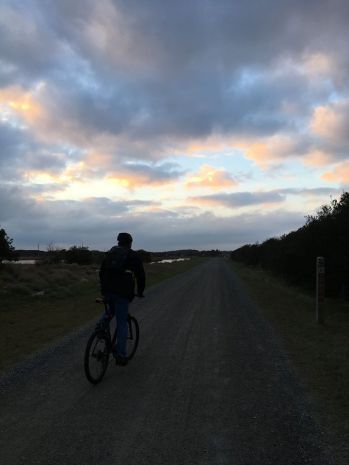