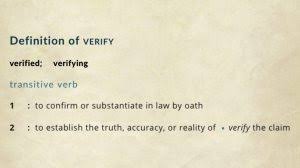 I tell my students on their first day that the most important question professors will ask any student throughout college from the start to their PhD is, “Where did you get your information?” That’s it. That’s the whole B.O.W. (Ball of Wax, come on). If the answer to that question is vague or first person or convoluted, they fail. But if the information they provide is excavated from the works of experts, and the students make that clear every single time—every single time—they introduce a subjective thought, they will gain the respect of their readers until the students become the experts and, as a result, the source for future researchers.

“Where did you get your information?”

Okay. Tonight’s View is from the professor/j-major in me.

According to the Pew Research Center and the Washington Post’s Fact Checker Poll, the most trusted news sources are predictably partisan. The vast majority of Republicans trust Fox News for their information followed closely by conservative talk radio, while CNN takes the top for the majority of Democrats followed closely by NPR and MSNBC. Both parties found little use for the other party’s choices. Go figure.

Fine. Let’s take a look at from where they get their information, shall we?

Sean Hannity is a conservative host who discusses political topics and influences millions. His education? He dropped out of NYU and Adelphi. It was his radio experience that enabled his charismatic presence to cover for his lack of expertise in anything he discusses. In the world of Mass Communications, he is not a journalist, though he plays one on TV. If any student comes remotely near this man on a works cited page, they fail.

Rush Limbaugh was another conservative talk show host discussing political topics and influencing millions more than Hannity. His Education? He dropped out of Southeast Missouri State University. His radio experience enabled his smooth voice and sharp wit to cover for his lack of expertise in anything he discusses. Again, cite him and I’ll laugh at you in front of the whole class.

These two have absolutely no background or degrees in journalism and how to verify information properly, or political science, or any experience in either politics or journalism beyond being disc jockeys with opinions.

Here is a disturbing example: conservative radio host Mike Savage has written multiple best-selling political books supporting his commentary on his syndicated talk show, though his three degrees are in botany, medical anthropology, and nutrition. He is not a journalist, not a political scientist, and not funny.

Thom Hartmann, as well, is one the most successful progressive talk show hosts as well as a business mogul, but his degree in Electrical Engineering from Michigan State didn’t qualify him for the multiple best-selling books he has written about politics. Come on! How is it possible anyone with a brain and a concern for this country takes advice from these people? “I’m really concerned about international relations and the effects of treaties on trade and military bases around the world. I think I’ll ask a botanist.”

And these same DJs are the same people who lead the masses in knocking Main-Stream-Media. Let’s have a gander at a couple of the more popular commentators these frauds have attacked: Chris Cuomo is a lawyer who is the brother and son of NY State Governors. Megyn Kelly, most famous for being ridiculed by President-elect DJ Trump when she was the only qualified person at Fox, has a political science degree from Syracuse and a law degree from Albany. If you want to know what might have the worst effect on your future when congress changes laws, who do you consult? The engineer? Two college dropouts with no experience in either law or politics but managed to stretch a college DJ gig into a career because they have good voices? Or a lawyer with a political science degree; another lawyer whose family has been in the governor’s house for decades?

Where did you get your information? Think about this before you answer, I tell them after I rant about these examples and more. I like to also point out that there is a chasm between News and Commentary. There is, in fact, very little “news” anywhere; that is, the objective presentation of indisputable facts. The majority of airtime is dedicated to talking heads chatting about “possibilities” based upon how they “feel” about something, each (both parties) bringing with them their own prejudices, ignorance, and agendas. Before anyone talks, and long before any student attributes information to a source, I’d better know their degrees, their experience, their qualifications to be considered an “expert” whose opinion is worthy of weighing.

And another thing: there is also a difference between an expert and a participant. An expert has all the information about the bigger picture, understands the cultural and historical context, has digested and contemplated the multiple facets of the topic through education, experience, and consultation with other experts. A participant was there. Bring in the soldier who fought in Iraq for his commentary about what we should do in Iraq; bring in the businessman for his commentary on what we should do in international relations; bring in the English professor to discuss what are the best teaching methods at the college level–do any of these three, and you fail. All any of these three can tell us is how “they” would do it; none can say with expertise that they know exactly how it should be done. These three or in the mix; experts are above it all, observing and taking notes.

Thank them all for their service and give them raises, and if I ever want to know what it is like to be in Iraq, I’ll ask a participant, just as I’ll ask a college professor what it is like to teach English. But they’re not experts at all. Students need to discuss problems in military strategy in Iraq or outcome results for college compositions with the respective experts. Am I nitpicking? NO. I’m ensuring that the information provided is as indisputable as possible.

To teach at a university you must have a terminal degree in the field you teach. I teach writing, as such my undergraduate degree in journalism, as well as my terminal degree in research methods and creative writing non-fiction directly informs my instruction. This is a no-brainer. My brother-in-law, for instance, is a well accomplished tenured historian at Temple University and author of multiple definitive volumes in history. He is one of the most respected people in his field. But he can’t teach chemistry. No one no one no one at all, no one at all, anywhere—no one—questions this. And education is not the only occupation which requires employees be learned in the areas they work. To be more specific, he even specializes in particular areas of history, and while he is extremely learned in just about any subject in the field, he will be the first one to pass along a question about medieval history, for example, to someone whose expertise lies there. I am qualified on paper to teach literature, to be sure. But my “area” is writing, and colleagues send students my way who are interested in such, just as I will recommend someone else to those who wish to learn Shakespeare.

Can you imagine an entire staff at any business or office where none of the staff has direct experience in the field? Inconceivable. Can you imagine what would happen if the people consulted for the most important decisions were not experts in research and investigation but instead radio personalities or billionaires with experience in a completely unrelated business? You get the picture.

The Fourth Estate demands expertise. “Fair and Balanced” is an amateur attempt at a quick Brand. It makes no sense. Real news is often not fair. Real news covers the facts, the verifiable facts, the indisputable facts no matter where they lead, and if they only lead in one direction then we all head that way. That is journalism. That is fair. Fairness is found in the research to unearth the absolute facts, not in the reporting. And balance has nothing to do with results.

In my Research Methods course, we discuss the best sources and how to eliminate the false ones, how to validate the authority of the source, and how to ensure a phony source isn’t presenting itself as an authority. This is a challenge in a world where verification before publication is nearly non-existent. Then we discuss the significance of knowing how to do this. On a practical level, I tell them it’s so when they’re looking for the right company for which to work, or the best investment for their income, or the best advice on health and medical issues, they know they’re not being misguided by incomplete information from unqualified sources.

But on a more immediate level, it also helps when listening to pundits pontificate about what’s best for our country, our families, and our children. I don’t want advice from my neighbor who “also had that condition” on what medicines to give a family member. I prefer a, you know, what do you call it? Oh right, a doctor.

And yet, honestly, most people are doing just that: taking advice from people who are more qualified to grow vegetables than they are to suggest who should run our country. These fools have thrown a damp blanket over true journalism, which insists upon validation of all sources. In essence, the most popular disc jockeys in the country, they call themselves commentators, are making everything up as they go.

So how do we understand the dangerous trend in recent years to dis an individual’s outstanding qualifications for something more appealing to the eye and ear, for someone who makes up facts to suit the listeners’ desires, which leads to higher ratings, which leads to twisting rationalization so far you have to go around your elbow to get to your ass? Get ‘em while they’re young; freshmen, high school juniors, middle-schoolers. Get them then and teach them the difference between a fact and an opinion, between an opinion and a belief, between a belief and a prejudice.

Well, the fact is facts never used to be so pliable; truth came after excruciating research and triple-checked sources. Informed individuals stood down when that research showed them wrong. Trust was a given.

This much is reality: the criteria used by many people in this country to choose a president would not get them a passing grade on a research paper in my freshman composition course. Misinformation is childish. Incomplete information is embarrassing.

And inexperienced, uneducated, unqualified commentators are not journalists, they’re not advisers and they’re not looking out for our best interests. They’re simply dangerous.