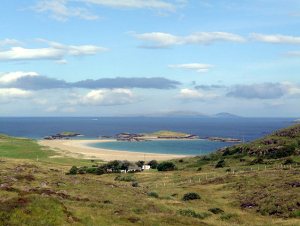 I’m looking out across the Wild Atlantic Way, where for thousands of years others looked out from these small islands on the west of Ireland, from the cliffs, from these craggy hills. Celts, Vikings, on through my own ancestry of McCormicks and Walsh’s and more, on through to poets such as Yeats and Seamus Heaney, all sat in these fields, on this beach in Connemara, in Connaught, and looked out across the Atlantic to the setting sun, to the once unknown flat vastness or inconceivable largeness of the wild seas stirred from storms.

It is calm today, and I’m thousands of miles from home, as I have been many times in my life. But this one is different. I’m not far, maybe walking distance, at the most a short carriage ride, from where some great-great-greats set the DNA ball rolling toward me. And a part of me, while waking here everyday in wonder at the distant connections, often thinks, well, who cares really? The world is not recognizable from those days; the criteria they used to make decisions about where to live and who to marry and what to do for a living don’t even fall in the realm of memory–they are on a separate plane. I am alive, now, rooted in my more immediate ancestry of fathers and grandfathers, cousins I communicate with on a platform for which there would be no explaining to an aboriginal Irishman from my centuries ago. I like now. I love now, in fact.

But another part of me feels more complete because of being here on this land looking at the ocean from the opposite side of my normal routine. It’s as if some long ago blood which once mixed in this soil can run through my fingers when I brush the grass, or when I run my palm on the wind-blown patterns in the sand, and it helps us meet each other somewhere in the between.

This is as close to going back to then as is physically possible. When I walked out this morning and looked across the gardens to the ocean, where at one time those McCormicks and Walshs watched the waves pull and push to shore, it was like I had found the edge of some abyss of time, and I leaned over my past, beyond my parents and their grandparents, to a time so long ago that this, right here, is the only common ground left. And I wondered again if I am just distracting myself from the here and now. Maybe it somehow grounds me?

John Edgar Wideman wrote that we all need two parents, four grandparents, eight great-grandparents, sixteen great-great grandparents, then thirty-two, then sixty-four. And that’s only six generations back to a time, he points out, when thirty-two men made love with thirty-two women, all in some subtle conspiracy to make me possible. And certainly some buzz of DNA filtered through which connects me to them, of course, but something else. I guess it is because I live at the water and spend most of my mornings looking out, looking “back” to not only a place but a way of being which was at one point part of who I was before I became.

Certainly I do not need knowledge of them to fully become myself, nor was there ever a pressing need to appear on this shore. I’m not Sean Thorton returning to Inishfree to reclaim a homestead.

Still, I could stay here. Oh lord, if reincarnation is a reality, and time were not as restrictive as we have made it, I could be born, breathe, and cease to be on the shores of Connemara, disconnected, without a need to cross the Wild Atlantic Way. I have been many places where I believed I could have a whole life. What a sad and sardonic reality that we have one life to live when a thousand times a thousand lives are not enough to completely experience being human, being here. We all play a roll, of course, and sitting here on the grass somewhere someone before me sat makes me feel like I understand my character a bit better.

Perhaps the most significant gain for me on these paths west of Galway is that I wouldn’t trade my life at all. I would never gamble with the memories of my childhood, my son’s childhood, the sunrises and sets, the Scotch with my father, the early morning talks with my mother, the laughter–oh the laughter–with my siblings. I wouldn’t lay one bet down against the birthday parties and anniversary parties, the pool parties, the block parties, the quiet moments late at night, the places I’ve been and the people I’ve known.

Perhaps I came here to thank the spirit of place which stirs again in my bloodline as I walk through the sands of Connemara, for being part of the cycle which made walking to the river with my son on my shoulders possible.

And I can hear, quietly, a sweet Irish blessing:

Thanks for the fullness

of days spent together

The friends that we pray

will be with us forever.

the food and the fun,

with faith that God’s blessings 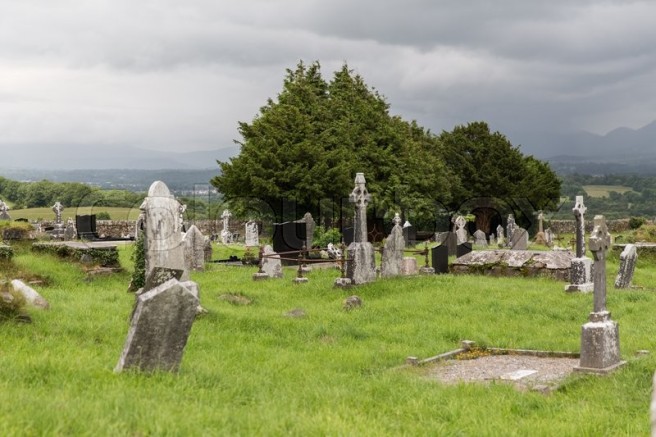