We looked at the stars again. Saw some passing meteors and the nearly full moon of course. And a few planets. But mostly stars. I don’t know their names and no matter how many times I read about them or someone explains them to me, that part of my brain simply doesn’t operate well anymore. I know Orion because of the old Orion Motion Pictures; that’s it. It is the same part of the brain that doesn’t allow me to remember names of students or meeting times. But out under the stars on a clear cold night you really don’t need to know the names of anything; not the stars, not students, not the days of the week or the towns on a map. It is late, and you’re outside like our primitive ancestors stood outside and there are stars, the exact stars our original DNA saw, and labels are useless, except to call them timeless, to call them exquisite, and to know that they are.

Some nights the temperatures are freezing, but that is usually because of no haze or cloud cover so the stars are even more brilliant. With the small scope we can see the rings of Saturn and four of Jupiter’s moons. We have also seen Venus and Mars, and a herd of constellations that start with a P or a C, I forget. One of them is Pleiades, I know that. They are the seven sisters.

I do know the big dipper when I see it, and a long time ago I saw the Southern Cross on a continent far away. I assume the brightest star I see so often in the south is either Alpha Centauri or Vega, but I really don’t care one way or the other. I’m not going there, not teaching astronomy, and I’m not trying to impress anyone at all. I did take an astronomy class in college, and on one cold night we took a powerful telescope to a hillside and took turns scanning the sky. When it was my turn I said, “This is out of focus; it’s all fuzzy,” to which the professor looked and exclaimed, “Holy Cow, you found a nebula!” He then told me I didn’t discover one but I did point the telescope toward a fuzzy patch someone else had discovered. Still, I’m not unromantic—I wasn’t oblivious to the idea that I was staring deep into space, across billions of years ago toward eternities from now.

I can’t wait for clear nights at home when we can see stars in the darkness across the bay or the river, but what I enjoy looking at the most is the moon. I never tire of staring at the craters, especially when it is a half-moon, which makes the craters so much easier to see than when the moon is full. My son will point the telescope toward Saturn’s rings or Jupiter’s moons and I’ll say, “Yeah, nice, now let’s look at our moon again.” He always obliges, but I understand why it isn’t as important to him as it is me.

In the late sixties I was just another kid like so many caught up in the space race, following the Apollo missions as they came close to the moon, orbiting it, sending back images of its surface. I had a brown jacket with a NASA patch sewed on the sleeve and an American flag on the other. I knew every aspect of space travel—the speed needed to exit the earth’s gravitational pull, how the Saturn V rocket was built, the space inside, the Space outside, the purpose of each mission, and the names of every single astronaut.

I turned nine in July of ’69 and we just moved into our new home. I remember my sister sitting on the floor and I joined her as we watched Walter Cronkite dictate the actions of Neil Armstrong and Buzz Aldrin while Michael Collins orbited above them. The next evening, I remember going outside and looking up at the sky, knowing they were up there and wanting more than anything to go there someday. We then lived in a world where we had walked on the moon. Incredible. It was the first serious ambition I remember; I wanted to train at NASA and be an astronaut. Of course. It wasn’t because I liked the science—my brother is the scientist in the family. No, it was because I liked the ambition of it all, the pursuit of something seemingly impossible, literally otherworldly.

Even at nine it meant to me that despite the turmoil of the sixties we kept our eye on the ball and refused to believe we could not achieve Kennedy’s decree. I am not sure the succeeding generations have a comparable ambition, at least not one as grand. Mars? Someday. Not yet.

So we go out and look at the stars and the full moon, and whenever I do I have hope again, despite the problems with the Russians (like in ’69), or bad race relations (like in ’69), or protests on campuses (like in ’69). It seems we have lost that spark, just a bit, and that’s okay for people like me who had that time, had that foundation of combining dreams with plans, ambitions with determination, like NASA did when I was young. But I wonder what the nine-year-old’s today turn to for that lesson of hope, that example of integrity and focus. What field do children’s fathers bring them to just before sundown to sit on lawn chairs and wait for what happens? An empty field has the potential of the sum of all possibility.

Humanity needs something larger than itself to shoot for. We can over-focus on tragedies and deceptions, leaving us the impression that today’s headlines are the beginning and ending of our existence. In the midst of such madness, striving toward an almost impossible ambition provides the perspective necessary to keep moving forward, to keep hope, to keep enough integrity to recognize we can do better than this. The greatest minds combined in the history of humanity have not yet figured it all out; but the pursuit itself has always been their purpose. We have focused too close to home, aiming merely to achieve; what a disappointing ambition. Perhaps we don’t spend enough time outside, where all desire begins, where all hope is born.

Maybe too many people think everything’s already been discovered. I’m sure others felt like that every step of the way from the Dark Ages through the Renaissance. And for the record, it wasn’t Galileo who first mapped the moon after seeing it through his telescope. That inaccurate historical note goes to Englishman Thomas Harriot who mapped the moon in July of 1609 several months before Galileo; 360 years nearly to the day before my sister and I sat on the floor and watched Neil Armstrong step down onto the lunar surface.

Can we reach the stars someday? Hell, I can’t even name the damn things, but I’m glad someone smarter than me is mapping the way. It was U.S. astronomer and pioneer of Dark Matter, Vera Rubin, who noted that more than anything else the discovery of the far reaches of space should teach us humility. We all could use a little reminder that we are at best merely guests here, moving through, making room for others hundreds of years from now to look up at the skies and marvel at the nebula, be amazed again at the craters on the moon. 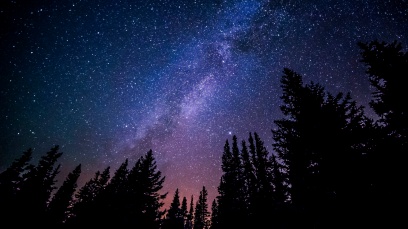