I am not a shell collector. I have a few by virtue of living near the water. And, of course, some I picked up on travels to Florida where the shells are beautiful. I do have an affinity for scallop shells, however. They are the symbol of the Camino de Santiago, the Way of St James. In medieval times, pilgrims would bring a shell back from the Atlantic to their parishes in France and Italy and other places as proof of completion of The Way. Today it represents the journey itself, both going and coming back.

So this morning I went for a long walk on the beach at Casey Key. I looked for shells on the same sands scoured by my friend Deb whose collection rivals that of anyone’s anywhere. It is phenomenal. But I don’t have her eye for shells in the sand. Part of that is my mind wanders when walking. It always does. It takes me some time to adjust from a normal schedule during a normal week to a non-schedule.

Which is why this morning I halfheartedly wandered along the waterline, picking up and tossing back broken shells, paying more attention to the water sliding past my ankles and out. I was thinking more about an essay I’m working on for a reading later this week. It is about the floods of eastern Siberia when Michael and I were there, and the possibility of the tracks being damaged by water on our way to Vladivostok. Often, I work on essays while walking, finding the digression, trying to extract the predictable.

I’m not alone in being distracted at the beginning and end of vacations, trips, retreats. The first few days we often worry if everything back home was taken care of, then we concern ourselves with the new routine of not going to work, not returning calls, not checking email. Eventually, we settle in to simply enjoy the passing of now. But then toward the end we bend back into leaving, thinking about the “week ahead,” about what is waiting for us and piled up while gone. So the “vacation” days designated to the middle often don’t amount to much, but they remain the time we need; the value in taking off our armor and being ourselves, completely in the moment.

So I let go. A dozen dolphins swept past and kept me in that moment for quite some time, the way they break the surface, the way one of them was a spinner, the way their return to these waters indicates the dangerous Red Tide is dissipating.

And I found a few shells. The best way to describe them is as small conch shells—really tiny ones, about two inches long. Most of these, when I do find them, have cracks or wide holes, but a few were in tact, survived the pounding waves and undercurrent. The shells themselves are simply the outer body part of an animal that has died and the soft parts of the animal have been eaten or decomposed.

Shells themselves have been used as money since the 13th century BC, and in some places such as West Africa, were still used that way well into the 20th century. A woman’s dowry would often consist of shells.

Hindus used left facing conch shells to hold holy water, and right facing ones are one of the eight auspicious symbols sacred to Buddhists. And of course shells have been used as tools and utensils for tens of thousands of years. The ones I have collected I’ll put on a bookshelf to remember my walks along these beaches.

The dolphins returned, and pelicans as well. A few dozen sandpipers chased each other in unison and the waves picked up out in front of Hurricane Michael off the coast of Cuba moving up into the Gulf and headed north just to the west. Post-hurricane high tide should mean fine shell searching.

When my own Hurricane Michael and I were in Spain, we wore the scallop shells on our packs. Painted in the center of the back is a red cross of St James. Today it sits on a bookshelf near my journals of that trip, and when I glance that way I recall cafes, walking through Galacia, or climbing the Pyrenees. The shell is an icon, a window to those times.

I knew I was moving toward leaving the Key when my mind shifted again toward Siberia and floods, the rumbling of the train, and the reading I have this week in Tampa. I’m not sure the essay is ready, and I need to print it out, and I hope the hotel in Tampa has a printer. Small thoughts, premature thoughts, seeping into the end of my walk.

Maybe that’s why the shells—they’re objects from the middle when I was still focused on shape and color, texture, water running up my calves. To me my friend’s collection represents more than the beauty and miracle of nature, it symbolizes retreat, it stands as her way of being in the moment.

Perhaps writing is my way of collecting shells, albeit in the shape of stories.

I think that’s what’s missing in the Siberian piece. The water running up the tracks, the texture and color of the river beneath the rails. So often the trip is about being in motion, rolling along, eating, drinking, talking to people and watching the landscape; but during the floods we were focused on the here and now, the unknown and unpredictable. We didn’t know what we would find; we really had no idea what we might find and we kept eyeing the waterline and waiting. 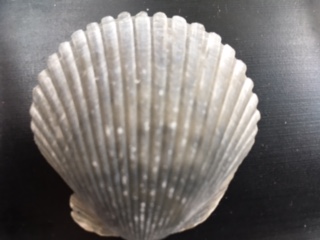 One thought on “Transitions”