Last week in my creative writing class we reviewed various questions to ask when returning to a draft. Where’s the best place to start? Is this detail to obvious? Is it too obtuse? One question in particular is a favorite of mine and I spent some time going over examples which moved to an interesting discussion: What value does this detail (image, sentence, etc.) bring to the work? We talked about fluff and filler and basic bullshit which often creeps into the craft, especially during the rough draft stage at the end of a writing session liquefied by too much Rioja.

And then the weekend came and the leaves along my road and along the river leading out to the bay were at their peak; that is, they were vibrant with red and orange, yellow and rust, and the deep blue sky behind them made for a scene no camera could accurately capture. My days immediately had value, enriched by the pure power of life in transition, which I could witness simply by walking.

This made me think of my father; I have so many reasons to think of him, particularly in the fall when things change. But the leaves remind me of how much he enjoyed the season. The fall is family coming for holidays, of course, which my father lived for, but also football on Sundays; and in all the houses we lived it was the colors of the leaves. Leaves ablaze burnt orange and fire-red, and blue skies contrasting black trunks and silver and brown branches. It is when we mark time with colors and the distance between a falling leaf and the ground.

When I was a child I found an oak near the creek at the end of the old trail along the Southern State Parkway, and I carved my name in the trunk. It might still be there, nearly half a century later; if some hurricane hasn’t taken it down, or some summer storm, or construction or a myriad other ways time steals our past. This weekend while out walking along the Rappahannock I wondered if I decided to drive to the very end of that Long Island road and park near our old house and walk through the woods to the trail, would I discover fourteen-year-old me standing there with a knife not understanding how fast the tree would carry my carving to incomprehensible heights? Would I stare across decades and measure the distance from my youth by the height and breadth of the trees I long ago climbed and swung from and hid behind? Nothing exceptional happened in those woods; nothing but the passing of time occurred where I carved my name in a tree while Dad waited at home for us to move on. But now, if when I returned to my car would I catch a glimpse of my long-ago father looking at the newly planted trees surrounding our new house anticipating their eventual majesty? Did we know we would move away so soon? Do we ever know how soon we move away?

So many seasons have passed, and once again leaves are ablaze, burnt orange and fire-red. It is as if new colors appear, and my son has spent his own decades taking pictures and marking time by the height of the apple trees in our yard, which anyway have lost their leaves for now.  Everywhere I look it is autumn and the branches more prominent, like bones pushing through aged skin. If my father were still here would he want to tell me again about the colors on the trees along the Brooklyn streets of his youth? I have never been able to take root like him, but I’ve come to understand the arch of ancestry and the unwavering value of the past.

And what value there is in every moment, in every season. What profound and inexplicable value exists in the persistent passing of time, the predictability of change, and the colors of life. Oh! Such colors of life! 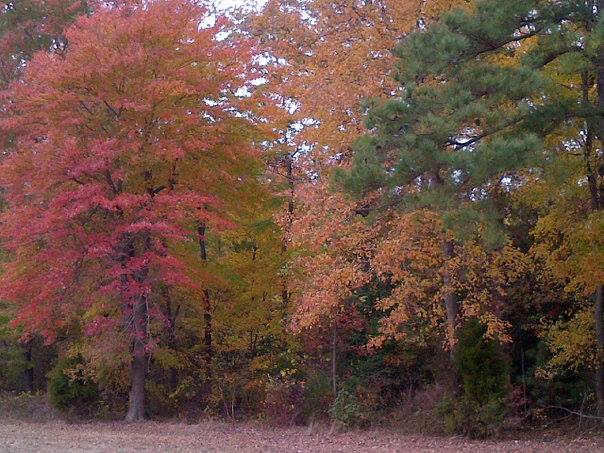