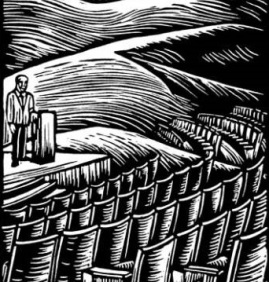 I’ve been thinking a lot lately about the past three decades at the college and I’ve noticed a few trends along the way. Many years ago I wrote a small work about being a professor, and it is interesting to note that things have not changed. That’s my fault though; I really forgot to make a note reminding myself to call each of my students and remind them to get up, to come to class, to bring their work, and to raise their hand.

Please. Allow me to note some consistencies:

Older students are better than those just out of high school. The big dude with the pierced face and tattooed eyelids is probably a great writer. Many students would rather pull a lower grade than have a professor look at a rough draft. Students who take copious notes don’t always fair as well as students who just listen intently. If it happened before they were born, it really doesn’t have any affect on them and therefore they shouldn’t be required to learn about it.

Hamlet is boring; Oedipus is stupid; statistics is tedious; bio lab is too long; developmental classes are a waste of money; introduction to literature is a waste of time; history is not relevant; philosophy has no practical application; psychology is disturbing and the instructors are disturbed; text messages are read more than text books; face to face communication is obsolete; and the only source of information is the internet.

Here’s the great irony of education: while we should become smarter as time goes by because we’ve been given the answers through the centuries, watched the lessons played out on the battlefields and in seminar rooms, we’re actually ignoring more, learning less, and not really keeping tabs of our decline.

Maybe if I text my lectures they’ll pay attention. Phones go off in class, in the hallways, in their backpacks. They reach in to quickly shut it off because they “forgot it was on,” and spilling out onto the floor are the books they need, a few small notebooks, and various articles of clothing. They carry more in their bags then in their minds.

The science and math books are ten-pounders, and the anthologies aren’t lightweights either. For lab they need their lab equipment, gloves, goggles, special notebooks, dead animals. Rough drafts, final copies, required journals, various books read besides the textbook, art supplies, tape decks, language discs, keys, wallets, games and personal items. Some have staplers, toothbrushes, condoms, aspirin, medicine bottles, and hand soap. Some carry crayons and cookies because their kids come to class sometimes when elementary school is out or cancelled, or when the kid is sick but the Prof told the parent if she missed one more day she’d fail the course. They carry medicine for those kids, bi-polar, attention-deficit, hyperactive. They carry the same for themselves, medicine for their own ADD, ADHD, OCD, diabetes and manic-depression. They carry a lot. They need to remember when papers are due, when tests are scheduled, including their math tests, their physics test, algebra, pregnancy, special needs tests, mammograms, CT scans, and various other tests they’ve got on their mind and written down in their notebooks at the bottom of their parcel.

They carry cell phones with various rings, various friends calling during class, right before class. They have small machines attached to their ear so they can remotely answer the phone without having to move their arms or lift their hands. They have the numbers of everyone they know automatically programmed in. They no longer have to walk to see anyone, walk to find a phone, remember any numbers, lift their arms, or turn their heads.

Once someone’s phone vibrated during class. The vibration on the desk was as loud as a ring, but she politely excused herself. Some professors insist the phones be off during class, and they won’t even allow them to be turned to vibrate. But this student came back in and said she was sorry and that she had to go, that was her babysitter calling and someone from her husband’s command post was at her house waiting for her to come home. A week later I discovered her husband had been blown up at a roadside bombing on the airport road from Baghdad. Another student’s brother was on television. He worked for Blackwater in Baghdad and she watched her brother’s charred body swing from a bridge in Iraq.

One student shot himself in the head because he thought the paper was due and he thought his medicine wasn’t. True story. A colleague of mine listened quietly one day to a near-suicidal student explain why her paper was late and how her daughter was going through depression and they were bringing her to the doctor to see what was wrong, and it weighed so heavily on her mind that she couldn’t really concentrate on the paper and would the professor mind the paper turned in a few days late, and she agreed. Students knew this about her—she would work with anyone. A few days later my colleague hung herself in her kitchen because her medicine was fucked up.

This is the American Community College. These are the trenches, in the city; some of these students come to get ahead, knock off some basic education classes before transferring and paying more at the university. But some come here instead of jail, or to bide their time, or to hang with old friends and maybe hook up with new ones. Some come to keep off the streets; it can get dangerous these days. But some of these students come from real war-torn areas. My student Deng walked across Somalia to Ethiopia twice looking for safety. Before he found it at ten-years-old in a Red Cross camp, he was given an automatic rifle and taught to kill. Now he tries to write about gun control and crime in seven hundred words, making sure the grammar is right. His mother was raped and hacked to death in front of his eyes. His father “disappeared.” He was a Lost Boy. Sometimes he didn’t concentrate. Yeah, okay, sometimes he didn’t pay attention. But when he came to my office we talked about politics and survival. We talked about Africa and faith. We talked about ideas, and he told me Chinua Achebe knows Africa. He told me how Sartre would not be popular in Somalia but Descartes would. He knew the differences, understood the gentle nuances that separate philosophy and politics. I didn’t ask about his scars. He didn’t ask about mine.

Some students came here with an education the likes of which we can’t possibly conceive. He told me he as soon as he found the camp he knew he needed to leave. I said I understood. He said it was too much, and he wanted to die so badly that’s when he knew he just had to get out. I didn’t answer. I had nothing left to say to him.

I have nothing left to say.

I wonder if any of my students from years ago wish they could go back to the start and do things differently. I know I do.

Sometimes I’d like to go back to 1986—amazingly only three years before I began teaching college. There was one moment then—I can still sense the stillness in the July air—I would like back. How different things would be. But we couldn’t know then what we know now. We were so young.

What I know now is this: all the lectures in all the classrooms from all the professors in the world will not prepare us to be anything of value if we don’t find any value in what we do and how we live our lives.

Of course we would all do things differently; even just a few small moments. I’d never have left Massachusetts. I’d have gone to Monterrey anyway. I would have passed on the Trout in Prague, the oysters in Asheville. When I left Tucson that last time I’d have headed west instead of back east.

We are always in pursuit of ourselves, aren’t we? Even if we don’t consciously consider such notions day to day. In class this morning I asked my students if there was anything they would have done differently in their short but tech-dominated past. They all laughed and had answers that ranged from staying off-line to trying harder in high school to treating a loved one better while she had the chance. They talked for a bit; they got quiet. They thought a while. And I added this: What are you doing now that five years from now you wish you had done differently?

They looked at me for a moment with just a little confusion and some wonder about their future, and they waited for me to talk.

But honestly, I have nothing left to say. 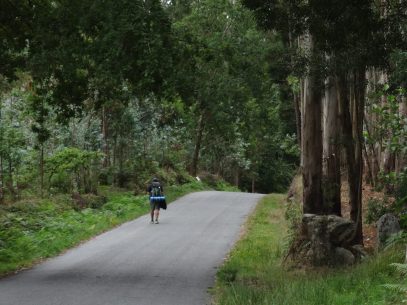