We canoed yesterday up the Rappahannock to a small tributary where we paddled up to the low-tide flats and eventually to a small swampy area near a farm. Along the way abundant osprey moved from branches to docks and back while several gulls stood their ground on pilings closer to the river. By the time we worked our way back to the Rappahannock the current had increased so that we paddled much harder to gain less distance. In fact, we stayed against the strong current all the way back toward the bay.

We didn’t take pictures; in fact, all we brought was water and peanut butter sandwiches. I didn’t even bring a phone. If we capsized or otherwise tumbled into the water, nothing would be lost. It was very freeing, and relaxing of course. We spent a good part of the morning drifting past large embankments with old houses set back.  Each has an extensive dock reaching to the channel, and some homes are so hidden by trees it was only the sun hitting the windows that made me realize a house was on the hill at all. Further along, the shrinking creek moved toward corn and soybean fields, so we turned around and worked against the rising tide. At one point a tern plummeted into the water exactly in front of us stealing away with a small croaker.

We’ve paddled along these small creeks and the wide Rap right at the mouth of the Bay for twenty years now. Sometimes we bring food and something to drink and we’ll rest on the beaches of one of the islands and have lunch then collect sea-worn oyster and scallop shells. When I was in high school we had a canoe and explored the shores of the Lynnhaven River in Virginia Beach years before development turned the area into more of a city. Back then I’d often bring a book to read and let myself drift in an inlet. Sometimes a fish would jump and slap the side of the aluminum boat. Those waters and these, about seventy-five nautical miles apart, are fantastically similar in their vistas, tides, and even their life; both are a source of oysters, crabs, and small fish. In both cases it was a short distance from the inlet to the Chesapeake, and in both cases I preferred not to bring anything along—no phones, no music, and often very little conversation.

These days, however, I’m not bringing along so much more than ever. Today we left behind the weight of negative thought from the media. I left behind the comments of politicians, the commentary of news hawks, the criticism of the swarming public. I consciously left behind fears of nuclear war and domestic terrorism.

I opted out of bringing along enrollment numbers at the college, my to-do list around the house, and any concerns I have had about food. I just pushed off and paddled back. I love the art of canoeing. The very nature of moving through the water demands I sweep the engulfing waters behind me in order to move forward. In fact, the river and bay have enough information already to occupy my continuing curiosity about time. Just a few miles to the south of nearby Stingray Point is an underwater crater near Gwynn’s Island in Mathews County where some long-ago meteor helped form the east coast. And throughout the Bay and River are reefs of shipwrecks hundreds of years old, lost during storms while exploring the wilds of these now domesticated shores. Out there we are constantly reminded of the fragility of time and the futile pursuit of hurtful, damaging, misplaced energy.

I can clear my head while out on the river. I can remind myself that nature is the best example of how if all is ever lost, one of our strongest traits is the ability to start again. It helps in times like these to know that no matter how bad things might seem, we can adjust our course, and if we tack correctly, we can even move with grace against the current problems.

This morning we saw a man at a boat slip, alone, returning his small fishing boat to the trailer behind his truck. It took him just minutes and then he was off. He hadn’t caught anything, but he waved with the pleasure of a man who had just completely let go of whatever might have weighed him down. I was never a fisherman, but right then I knew I would be good at it since catching anything is not really required. I would do as well as Thoreau, who wrote, “Many men go fishing all their lives without knowing it is not fish they are after.”

I am not trying to hide; I am not paddling away from anything. I am moving into the permanence which is nature as I did forty years ago, as I hope to do for years to come. It doesn’t ridicule; it doesn’t pass judgement. It doesn’t change the rules or tease or taunt. And while it can be brutal, it is brutally honest. And when I again navigate those waters and can deliberately move through the day, I will be, like Thoreau, ready to return to civilization. 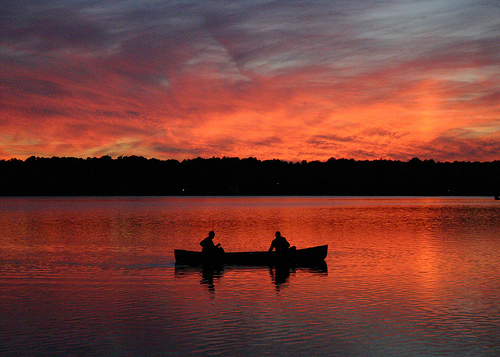